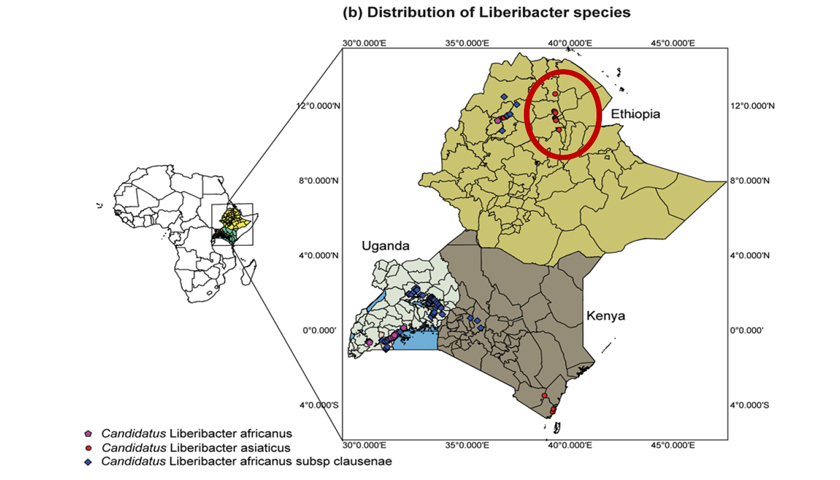 HLB now in Kenya: Preparations to mitigate its impact on the Southern African citrus industry.

The presence of Diaphorina citri (Asian citrus psyllid, or ACP), the primary vector of the dreaded Huanglongbing disease (HLB, or Asian Citrus Greening), was first reported in east Africa in Tanzania (2015) and Kenya (2016). Surveys that CRI conducted in collaboration with local scientists, confirmed the presence of ACP in the eastern regions of Tanzania. Recently HLB, previously known to occur in some parts of Ethiopia, was detected on the east coast of Kenya (Fig. 1). The recent detection of HLB in Kenya brings it considerably closer to citrus production in Southern Africa. CRI has engaged in a process with Department of Agriculture, Land Reform and Rural Development (DALRRD) to encourage Kenyan partners to scope the possibility of containing and eradicating the disease in the region.

The detection of Las in east Africa, highlights the importance of the HLB and ACP preparedness actions that CRI has been developing in southern Africa. This report aims to inform the industry about the significance of the recent reports from east Africa, and provides a brief on various preparedness actions being undertaken in southern Africa. Finally we urge growers and nurseries to implement or continue diligently with early detection of ACP – using yellow sticky traps and scouting of trees for HLB symptoms.